If you hear the story of Green Monday, it sounds at first like a modern business fairytale. A startup that was founded by two vegetarian entrepreneurs, set out to tackle climate change and global food insecurity by promoting and enabling green, healthy and sustainable living – and against all odds this social enterprise is leading the way for others to come and showing that change through business is actually possible. Within less than 3 years the young startup reached millions of people, partnered with some of the world's largest corporations and has won numerous of awards. On top of that, Green Monday was recognized as one of “Top 50 Most Innovative Companies in China by Fast Company. I met with David Yeung, who is the co-founder of Green Monday in Hong Kong, to talk about how it all started, what’s the secret behind their success and what his vision is for the future. 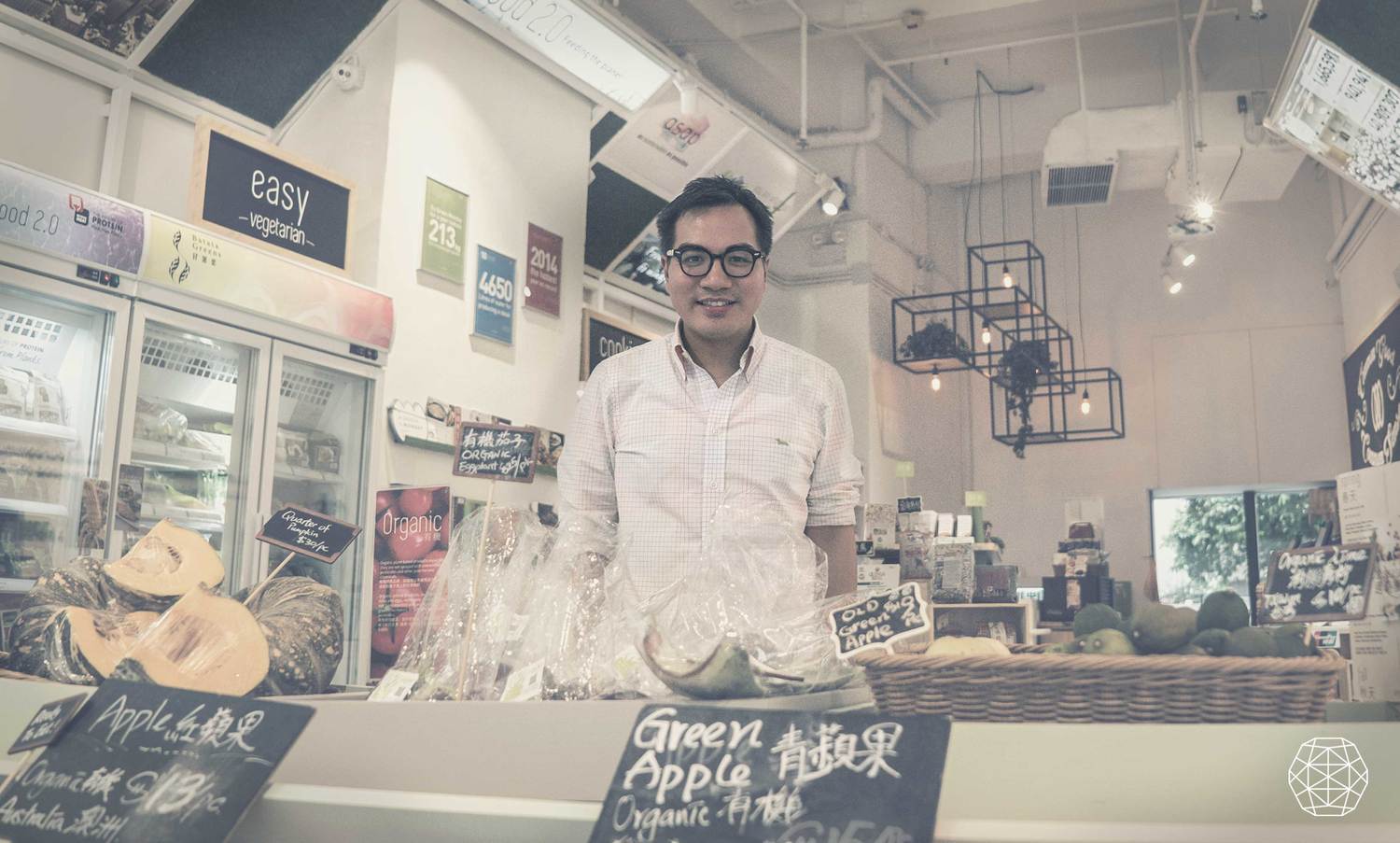 ‍Let’s start with a short introduction about yourself:

Sure, in a nutshell: I studied engineering at Columbia University and founded my first start-up in 1999. From this point on I became very passionate about building things from scratch. Today I´m serial entrepreneur, I have business in investments, in retail and I'm also heavily involved with a lot of charity and social causes. But the project I'm most focused on at the moment is Green Monday.

David you have been selected by Purpose Economy as “Asian 100 Pioneers”, along with Mike Bloomberg, Elon Musk, and Jack Ma. Before we dive deeper into Green Monday, I’m curious to know about your perspective on what needs to change in business in general?

I think businesses, whether they like it or not, need to understand they have a social responsibility. One of the biggest problems is that of the most crucial expenses are not factored in at the company's balance sheet - that are social cost or environmental cost. Actually, this is a complete loophole in the whole capitalistic world. When people think about maximizing profit, chances are something has to give. Oftentimes it's the social and environmental issues of consequence. So in general – that’s a key thing that needs to change in order build a sustainable economy.

‍With Green Monday you set out to build such a socially conscious business. What was the inspiration to start a new venture around food and living green?

I have been a vegetarian for 15 years and one of the things I notice is that most people have a lot of misperception about vegetarianism in general. They think there's a lack of nutrients, it's not healthy or they just have doubts from the old thought patterns that are ingrained in our culture. And because it’s not popular there aren't enough options – especially here in China. So I was confronted with that situation everyday.
Along the way I read reports from the UN, and other scientists that say that meat actually is the biggest reason for global warming which is the biggest threat to our planet.

Something struck me when I connect the dots. Well, I'm a vegetarian, are you telling me that I'm doing something that could help the world big time? That was the “Aha moment”.
Then I sat down with a good friend of mine Francis Ngai, who is vegetarian too. He is the co-founder and CEO of an organization called Social Ventures Hong Kong. When we both talked about the idea and it became clear to us we have to do something about it. So on Earth Day April 22, 2012, we launched Green Monday. That’s how it all started.

But instead of just running a campaign or starting an NGO on the side, both of you decided to establish a social enterprise, what was the reason for it.

Francis and I both come from a commercial background; he has been in advertising agencies and marketing departments of big corporations for many years. We both saw that in order to change people to green it cannot just be a campaign or a slogan. If there's an economy, there's obviously a demand and supply side. You cannot just change the awareness, which is the demand. You need to also change the supply side too, because demand is often influenced by supply.

So we knew from the beginning there has to be a business element to it for two reasons: One, we need to influence the supply side. Two, we ourselves need to be sustainable. We don't believe in a model that is purely on donation basis. We want to build and scale a business that has an impact--not spend our time fundraising.

‍
‍
And the impact to date is absolutely incredible. A recent study showed that before the Green Monday Movement, only 5% of people in Hong Kong adopted any sort of vegetarian habit. Only two years later, 23% of people in Hong Kong are practicing at least one day of vegetarianism a week. Within the last 3 years you reached millions of people, partnered with hundreds of restaurants including the biggest fast-food chain in China, Café de Coral, that serves over 330,000 customers per day. On top of that, national and international universities, schools and many Fortune 500 companies joined your movement to bring more green food to the table and promote a new sustainable lifestyle.
I mean, what is different, how can you explain such a success – because the idea about “living green” has been around for quite a while and there have been many attempts before to change people’s behavior.

I think “living green” in the last 20 years has always remained on a very peripheral level. Maybe it’s because most of the traditional approaches to change something worked like a funnel.
The first step is science and research. "Let me get the numbers right." The second is advertising and promotion. "Let me get political leaders or let me get major celebrities to talk about it." The third one is to hope people will change their behavior. And like a funnel, you start at the top from 100% it end with maybe 5% at the bottom (at best).

We knew that this doesn’t work so Instead of going down the same path we flipped the funnel and tied the message into an existing behavior that people do everyday.

In our case it's eating. Preparing and consuming food is a very social activity. Our goal was to lower the barrier to entry so everybody can participate. We call this "Baby Steps to go Green”. Because the beautiful thing of a baby step is once everyone is doing it, it becomes a trend. Once it becomes a trend, even more people will do it and want to be a part of it.
‍

‍
And what about the name, why did you choose “Green Monday”?
‍

‍
I think in the name is the real magic. We deliberately chose these two words to be so simple so that every three-year-old in the world would know.
Monday is a chance to welcome a change of pace in the mind and the body and you can do it 52 times a year. At the beginning of the week, when intentions, plans and expectations are set, having a Green Monday symbolizes a wholesome start.

Together with bundling the green education into the most viral and social activity in the world, which is eating – we had the right mix.
If I have to boil it down it would be these factors. Simple, viral, and actionable.

What role did branding and marketing play in this mix?

Branding and marketing are essential to the success of Green Monday. People are bombarded by information. That's why we needed excellent creative communication that makes the message stand out among the clutter.

But the movement is only one part of your company; you mentioned earlier that you are also working to change the supply side for green products.

Yes, the other crucial part we are innovating on is our enterprise model. Under Green Monday we have four arms. There's the public advocacy arm, which goes out and inspires people to life greener. The second one is the consulting arm. It's basically an agency that works with green companies.
The third element is the venture capital model. We actually invest in companies that want to go green because overall we need more solutions and through our network we are able to speed things up so much faster.

Last but not least, we have the retail model, where we want to help people to find choice. Basically whether you are trying to educate, to advise, to build or to serve, distribute, we have that solution. I like to call our model the Swiss Army Knife of green.
‍
‍

Ok so we are sitting in your “Green Common” store here in Hong Kong, can you tell me more about the concept behind it?

First of all, when we talk to a landlord the first thing we say is, "Don't treat us like tenant. Treat us as your community partner." We are here to build a green community. There are many social elements in this shop that are beyond just transactions. For example, there's a water machine there, so we ask people to bring their own bottle. Or we host classes here all the time. We want this to be a school. And of course, you see around the shop a lot of educational material, a climate change gallery. Telling people why we need the change. That's why we call it "common". It's a common space to learn, to eat, and to live green.

It’s really impressive what you have built in such a short amount of time. What is your vision for the future?
‍

‍
Again, it’s two-fold. One is no doubt from a green standpoint. We want to empower people and companies to become change makers themselves. That's on the green advocacy side.

On the business side, we want to let the world know that social entrepreneurship can be successful. You can balance the social side and the business side. As a matter of fact because when you combine those two, then you have a chance to create a green and responsible economy, which actually is the major engine behind a green and sustainable world.

Ok the last question would be for the young people out there that want to make a difference. What advice would you give them?

I have a very unsexy advice to give: I say work in the business world. Because if you haven’t  worked in the business world, how do you know which part is the problem? It's like if you are never sick, you don't understand the mindset of the patients. In our world, at the end of the day, it's still very much dominated by capitalism. We do need to learn the intricacy of how capitalism works.
Of course I'm not saying you have to wait until 35 to start a business. Spending some years in the corporate world and understanding the problems with corporate is a good start.
After you accumulate experience, you have a very good foundation to found your own business to fix the world problems.
I know it's a little bit anti-climatic. People want me to give some very phenomenal advice like, "Okay, let's do this, and you can become successful." Actually, when it comes to execution there's no shortcut.

Thank you David for taking the time out of your busy day to share your vision and learning’s with us. For everybody who wants to know more about David and Green Monday click on the links below: